WASHINGTON, D.C. – The Organization of Women in International Trade (OWIT) is pleased to announce the recipients of its annual awards. Presented today at OWIT’s annual meeting in Washington, DC, the awards recognize outstanding contributions to the organization and showcase how the winners leverage their passion and dedication to advance women in international trade and business.

“The 2019 award recipients are all outstanding contributors to OWIT and the broader global trade and business community,” says OWIT International President Jennifer Diaz. “We celebrate the accomplishments of our annual award winners. They are stellar examples of what makes OWIT such an extraordinary global organization. 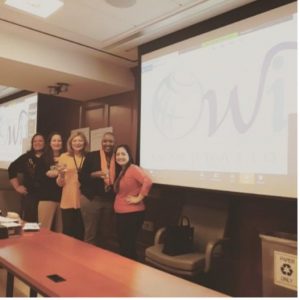 Susan Baka’s passion for trade is deep and palpable. An energetic advocate for women exporters and for OWIT, she is a prolific writer and global speaker on trade, women’s entrepreneurship and diversity who has represented OWIT on panels at the World Trade Organization and in free trade stakeholder consultations. Susan is a founder of the first Canadian chapter of OWIT – in Toronto – and has served on the international board for almost 20 years. As a start-up expert, she has spearheaded countless communication initiatives as well as trade missions to Mexico, Australia and the U.S., and has mentored the start-up of chapters in other countries. In her own business, Susan works with financial institutions, governments and organizations to help companies go global. She served on the Canadian Minister of International Trade’s SME Advisory Board from 2008-11 and, most recently, participated in the Canadian government consultations on the NAFTA renegotiation. “Whether mentoring other chapters, grooming young women to take on leadership roles in OWIT, or speaking passionately to elevate the image of OWIT at local, national and international events, Susan is a strong role model,” says OWIT-Toronto advisory board member Gail Morris. “She nurtures her contacts in many countries, always promotes OWIT during the course of her own work, and feels strongly about showcasing other role models to inspire women to pursue international trade and business.”

2019 OWIT Chapter Member of the Year – Deborah “Debbie” Fallucca, CPA, Treasurer, TBOWIT (Tampa Bay, Florida, US)
A Principal and CPA with the Tampa firm Gregory, Sharer & Stuart, Debbie Fallucca is entering her third year as TBOWIT’s Treasurer. During this time, she has not only admirably accomplished this role, but contributes in myriad ways to the chapter. No task is too big or too small as she helps with all that is asked. She makes connections at every networking event the chapter hosts, and has even hosted her own TBOWIT events and promoted TBOWIT at external events. “Debbie is truly passionate about the mission of TBOWIT and OWIT International,” says TBOWIT’s President Christyna Doege. “She is a pillar of this organization who brings her extensive expertise as a CPA to our organization and a level of seriousness and professionalism from which we all benefit. Quick to compliment and support, we would be the poorer if we did not have Debbie on our team! She makes it all look easy!”

2019 OWIT Chapter of the Year – OWIT-Nairobi, Kenya
OWIT-Nairobi is committed to raising awareness and advancement of significant trade-related issues. It conducts trade missions that serve as a platform to inform different stakeholders about OWIT and its mission. In 2018, OWIT-Nairobi organized a trade mission to Rwanda in partnership with the Embassy of Rwanda that saw a number of entrepreneurs do business with that country. In addition, it proudly hosted the 18th Annual OWIT Conference, bringing together different trade experts, entrepreneurs and corporates for a three-day, highly-successful event which helped build partnerships with numerous stakeholders. It illustrates its leadership as a chapter by mentoring other OWIT chapters and sharing organizational management experience, processes, and procedures.

OWIT Nairobi is recognized locally as a leader on international trade issues. It enhances professional development of its members through mentoring, sponsoring programs and activities to support the development of personal and professional skills and establishing educational programs, conferences, and other activities to promote international trade employment. “OWIT Nairobi is passionate about empowering women to transform communities through global trade and this award is an affirmation of the work that we are currently doing on the continent,” says Mucha Mlingo, President. “Thank you to OWIT International for recognising the work that went into hosting the 2018 conference, OWIT’s first international conference outside of North America.”

About OWIT
Founded in 1989, The Organization of Women in International Trade International (www.owit.org) is a voluntary, non-profit professional organization dedicated to advancing global trade opportunities for women through networking and educational programs. It comprises more than 2,000 members in local chapters operating in the Americas, Europe, and Africa as well as a “virtual” chapter composed of individuals who do not reside or work in localities with a local OWIT Chapter.