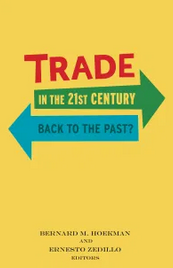 Trade in the 21st Century: Back to the Past?

Despite troubled trade negotiations, global trade—and trade policy—will thrive in the twenty-first century, but with a bow to the past.

This new volume, edited by Bernard M. Hoekman and Ernesto Zedillo, assesses the relevance of the WTO in the context of the rise of China and the United States’ turn toward unilateral protectionism.

The contributors adopt a historical perspective to discuss changes in global trade policy trends, adducing lessons from the past to help understand current trade tensions. Topics include:

By reflecting on past episodes of protectionism and how they were resolved, Trade in the 21st Century provides both context and guidance on how trade challenges can be addressed in the coming decades.

This presentation is designed for the global trade practitioner who:

Welcome and introductions by:

Closing remarks and adjournment by:

No charge to OWIT Members or ITCC Members with discount code; $15 for Non-Members